Navigating pitfalls and prepping for forgiveness 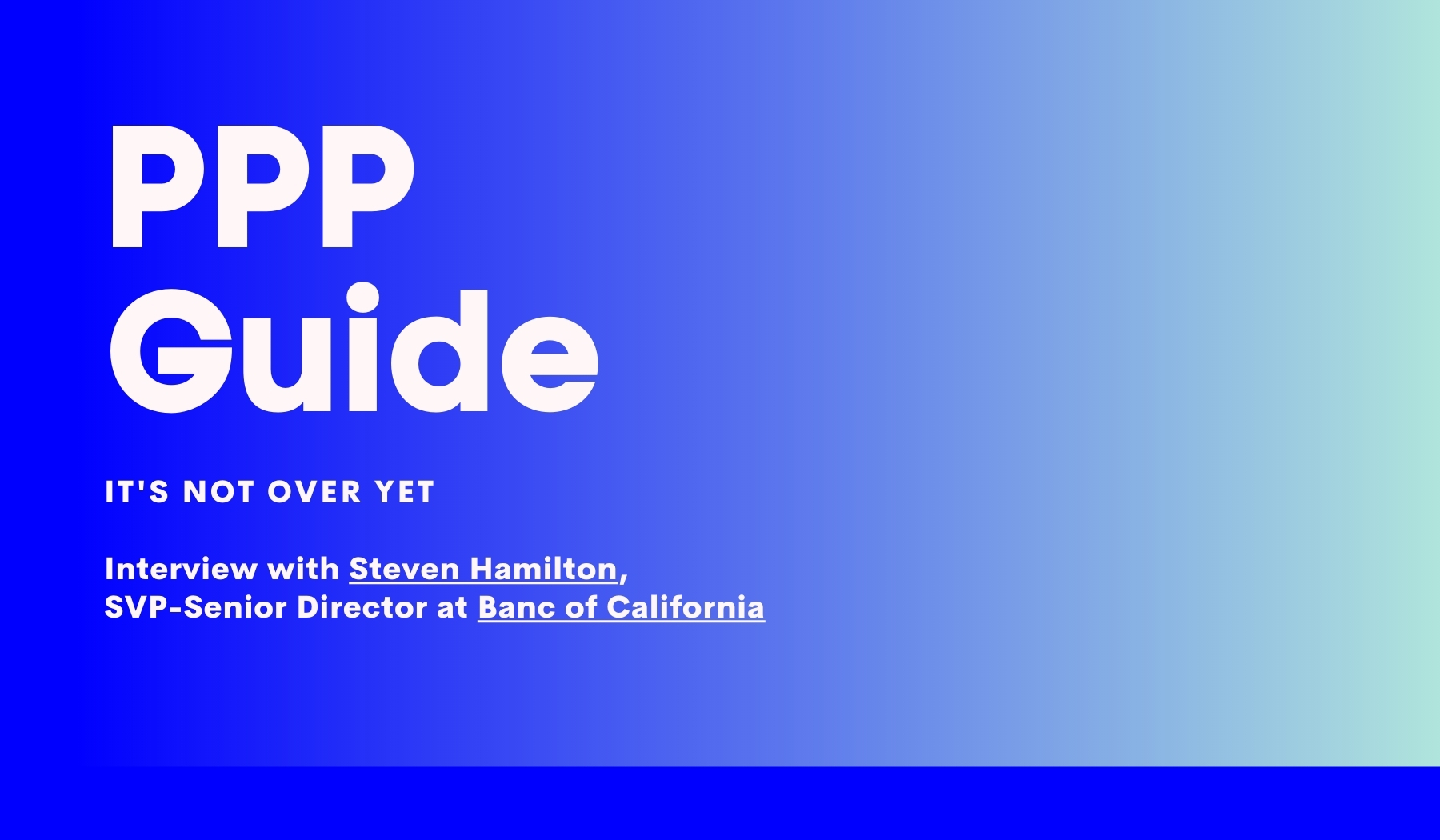 The Paycheck Protection Program started as a way to help small businesses — an integral part of the CARES Act in terms of COVID relief, PPP loans promised small business owners a fast and convenient way to keep their business afloat, and their workers on company payroll.

However, in January and February of 2021 some small business owners report that the measures implemented by the Small Business Administration (SBA) to screen for potential fraud have only caused stress and delays in the system.

We sat down to talk with Steven Hamilton, SVP of Banc of California, about the PPP loan forgiveness process: the troubles accountants have been running into, how new PPP policies are affecting business managers, as well as advice to best navigate the PPP process.

A common source of frustration is the speed of approval. Many people expected the current PPP program to operate similarly to the first round of PPP, which distributed $349 billion in loans within two weeks in April 2020.

Hamilton commented that during January and February 2021, a lot of confusion came from a lack of communication — particularly in the review process with second-stage applications. As many as 20 percent of second-round applications get held up in review, flagged with forty or more hold codes with no clear guidance or resolution. For example, many business owners have called the process “chaotic and arbitrary,” with policy changes as small as changing the decimal place of different balance sheets to random windows of time in which different businesses can apply for PPP. President Biden approved a 14 day window last month in which the SBA would only accept applications with businesses with less than 20 employees.

“The program was launched very rapidly. During the first round of applications the SBA didn’t review them, it was up to the bank to determine loan eligibility. Loans would automatically get approved, however during the second round the SBA built a system that had a whole bunch of checks and balances,” Hamilton said. “Basically those checks and balances didn’t necessarily work as intended, and SBA was not giving information as to why certain applications weren’t getting pushed through.”

President Biden, as of March 17, 2021, has extended the deadline to submit a PPP application to as late as May 31st. This extension gives banks more time to process loan applications and gives the SBA time to update its E-Tran system.

Confusions with codes, labeling, and file numbers have caused disruptions in determining whether or not the PPP loan gets approved. Hamilton dealt with cases in which the system would falsely attribute a duplicate DUNS number to a loan application, flagging the applications as potentially fraudulent.

When working closely with business managers and their clients, Hamilton found that something as simple as the address listed caused a lot of hold codes.

“I have had situations where business managers have one office address and they’re handling many clients. So obviously when you’re submitting a PPP application the address that’s associated with the office is causing issues because there were many PPP loans assigned to that same address,” Hamilton said.

To resolve the issue, Hamilton had to work with the business managers to contact SBA to provide reasons as to why there were so many PPP loans for one location.

“That’s probably the most common issue for business managers, one I ran into most often and it was simply because of the fact that all the information, all the applications, and all the mail get sent to one office,” Hamilton said.

How a change of ownership affects how you request forgiveness

According to Hamilton, whenever there’s a change in ownership, it is important to disclose that information to the SBA.

“So in one particular circumstance, I had an individual that sold their business. We submitted the application so that they could close the acquisition in 2020 because there were a bunch of tax law changes in 2021,” Hamilton said. “It was really important to do this in 2020 to avoid that and we placed the balance of the PPP Loan in an escrow account and submitted the forgiveness application. Once the application was processed and approved by the SBA, the balance of the escrow account was sent back to me, the seller.”

SBA attempted to clear up confusion and speed up the process by giving lenders the authority to clear codes without having to submit supporting documentation in select cases; however, this does not apply when the borrower applies for loan forgiveness. It also does not clear up what documentation would be adequate, especially when they are submitting that information at forgiveness.

It’s time to file for forgiveness

For loans over $2MM

For PPP loans > $2MM+, it’s very important advisors and clients complete the Loan Necessity Questionnaire when submitting the application or shortly thereafter as the SBA only allows 10 business days to complete once they’ve formally requested. Many overlook this as it’s not required to submit the application, but the SBA will request during their review and only provide 10 days to respond. This is a very in-depth analysis and requires time, so it’s best to be prepared; Hamilton recommends including a memo to address each section of the questionnaire and explain your response in detail as this will help address further questions from the SBA. This form is found on the SBA’s website – SBA Form 3509 (for profit borrowers) or Form 3510 (non-profit borrowers).

SBA is trying to make improvements

However, despite the difficulties in the PPP process, Hamilton does believe SBA has been trying to make improvements. While PPP loans had a chaotic first couple of months, Hamilton believes the changes implemented to clarify and expedite the process have been effective in clearing up a lot of the clerical errors that held up approval.

According to the Journal of Accountancy, some of the changes include:

“What’s important is to have excellent communication with your bank,” Hamilton said.

“In the initial period, for both the first and second round of PPP there was a lot of chaos, there were a lot of unknowns that people didn’t really know how to navigate, continued Hamilton. “So it’s really important that the individual has a good relationship with their bank to make sure it gets pushed through.”