NFTs in the Land of Milk & Honey 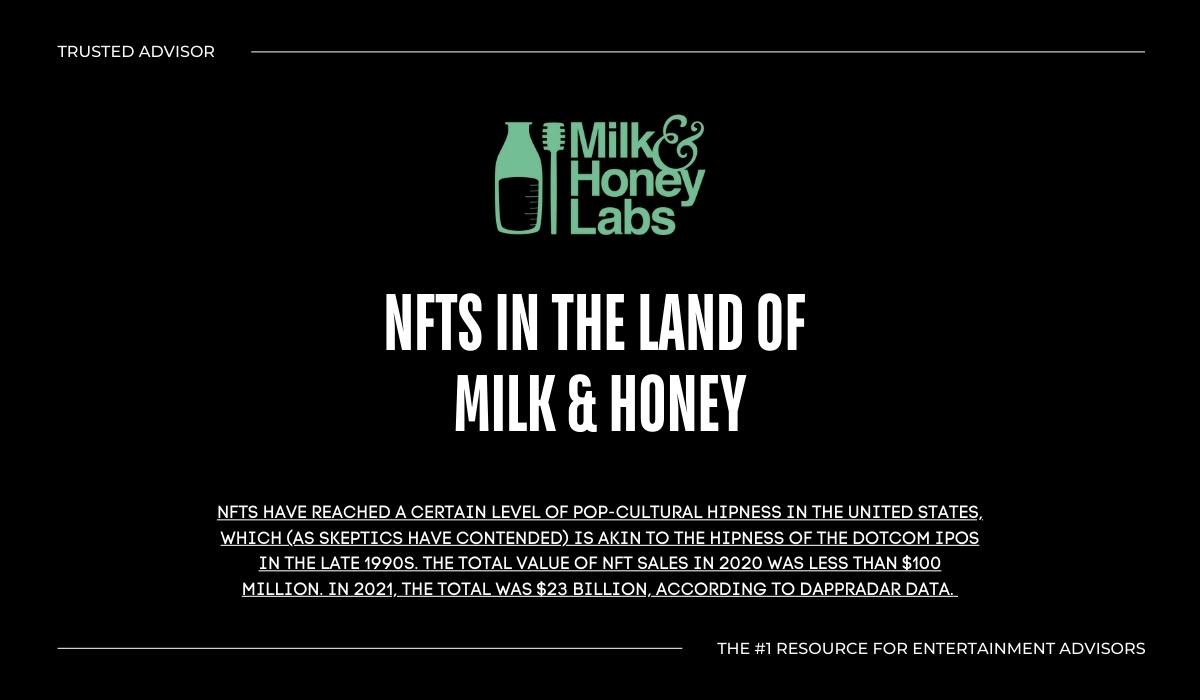 Music and sports management company Milk and Honey is expanding into the world of non-fungible tokens (NFTs).

NFTs are an artifact of the same blockchain technology that underlies cryptocurrency. And, appropriately enough, NFTs are often bought with the cryptocurrencies. But NFTs and cryptos are very different applications of the underlying tech. Bitcoins are fungible. An NFT is a virtual-world collectible. Its appeal lies precisely in the fact that it is provably unique or rare. The buyer-recipient acquires a unique token for his or her own digital wallet, just as the buyer of a Picasso obtains the physical object to display on a tabletop or on the wall of his/her home.

What other rights pass from seller to purchaser when the NFT is sold depends on the specifics of the project and can require careful contracting by the parties to the transaction.

The blockchain that creates an NFT gives to the token a cryptographic signature that cannot be transferred or copied without the consent of the holder.

Milk & Honey’s new division Milk & Honey Labs has decided to venture into this space. One of the 20th century’s most famous artists has become its door. In 1958 the famed Spanish painter and sculptor Pablo Picasso created a large ceramic bowl, featuring an abstract but joyful painted face. The bowl has never been publicly displayed: it is in the private collection of the artist’s granddaughter Marina Picasso and great-grandson Florian.

That bowl is the inspiration for 1,011 unique digital works that hit the market late last month (Jan. 28). One thousand of those were dubbed Visage de Couleur, another 10 Visage de Lumière, and the outlier is Visage de Demain.

NFTs have reached a certain level of pop-cultural hipness in the United States, which (as skeptics have contended) is akin to the hipness of the dotcom IPOs in the late 1990s. The total value of NFT sales in 2020 was less than $100 million. In 2021, the total was $23 billion, according to DappRadar data.

In a recent taping (Jan. 24) of The Tonight Show with Jimmy Fallon, the host congratulates guest Paris Hilton, a reality show star and newlywed, on the fact that Forbes has named her one  of the top 50 most influential people in the NFT space.  Hilton responds effusively, talking about how proud she is of being “part of this community.”

In their brief conversation, Fallon says that he, too, has jumped into the world of NFTs. And that is true. Fallon spent more than $200,000 on a “Bored Ape” NFT. This makes him part of the “Bored Ape Yacht Club,” and, according to the BAYC website, it can serve Mr. Fallon as a “digital identity, and open digital doors.”

Were Pablo Picasso still around, grand-grandson Florian suggests, “he would be interested in [the NFT market’s] abstract influence on the art world.”

As noted, the Picasso deal is the first project from Milk and Honey Labs. Its website indicates this is just a start, as it is “in partnership with multiple major financial institutions, sovereign states, athletes, musicians, legends, and heroes of the past and beyond.”

As Web 3, the latest generation of the internet, unveils itself, Milk & Honey Labs will have further projects in NFT, as well as in the Metaverse, the world of cryptocurrencies, and so forth. The Labs will retain the Milk & Honey focus on the representation of talent, while working to set new norms on deals, business opportunity, and the interface of content and market.

The new division is run by Alex Harrow, who also heads Milk and Honey’s New York office. It will be curating projects and connecting artisans for the creation of successful NFTs the same way it already does connect producers, songwriters, DJs and artists for the creation of hit songs.

Many NFTs of late have been multimedia. The Picasso project joins that trend. Each token features a new original song created by John Legend, rapper Nas, and Florian Picasso, named Tomorrow. Separately, the song was released via music streaming services Feb. 4 and is now available on YouTube.

The remaining drop, featuring five NFTs distinguished by dominant color offered in editions of 200 each, was offered to the public on a dedicated website hosted by Origin Protocol, a decentralized marketplace. This was not an auction. It was a sale at a fixed price of 2.0 Ether (approximately $6,200 each).

The underlying ceramic work was to be auctioned off through Nifty Gateway. But a surprise was announced on Feb. 3, “One lucky buyer of the 1,000 pieces from ‘Visage de Couleur’ will be receiving a physical ceramic from Marina Picasso’s private collection,” reads a press release from Florian and Marina Picasso.

Where Now for Milk and Honey?

As the Milk & Honey website says, the new dimension of the worldwide web is exciting because it shifts power away from big tech companies, toward individual users, and in the process it takes the ownership and experience of individuals to “another level not previously imaginable.”

Other Use Cases for NFTs

Although NFTs have come to be associated with works of art, it is worth noting that art is not the only use case that can be made for the innovation they represent. Consider as another example: concert tickets. A buyer of the right to sit in seat 55B during a concert is buying something non-fungible: a very specific time and place. Yet with low-tech paper tickets, scalpers lead to waste and distort the economics, while counterfeiters create the possibility of more than one person who believes he had a right to be in 55B.  The spread of blockchain based concert and movie tickets (and blockchain theme park admission rights, etc.) could end this problem, while making life easier for both buyers and sellers.

Even more ambitiously, Derek Radu Smith, a financial modeler, posits that real estate titles will soon end up on the blockchain. If so, as Smith observes, they will also have to be NFTs. No title to a plot of land is “fungible” with that for any other plot. Location is always unique.