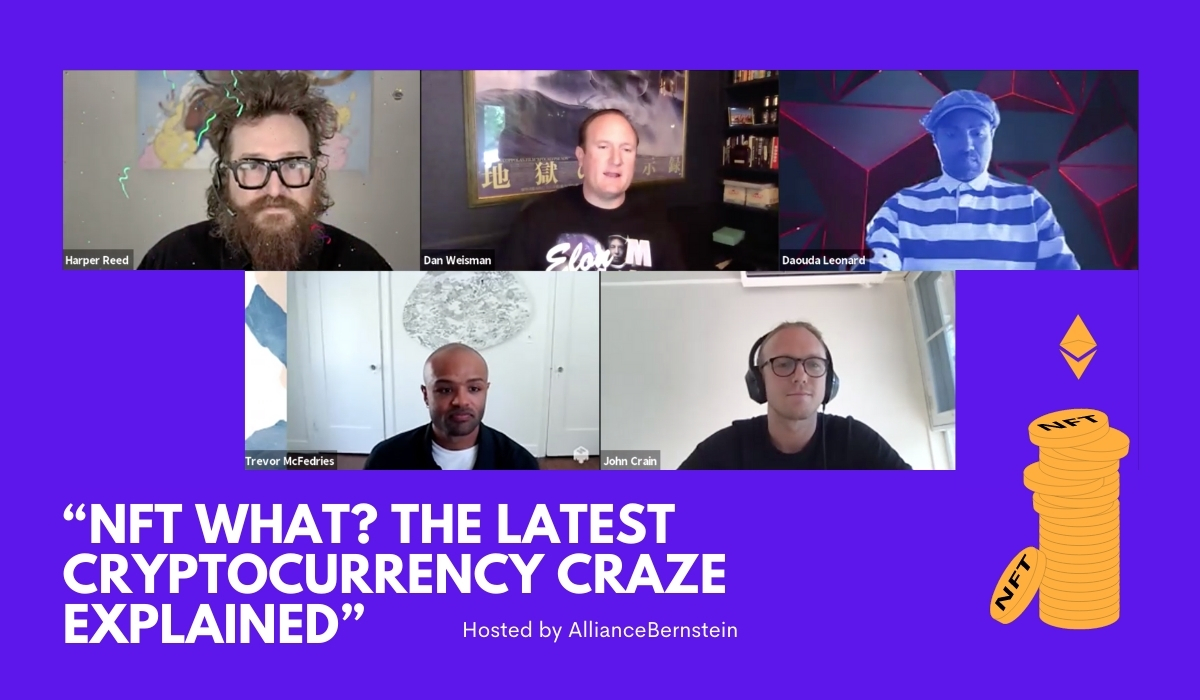 Research investment firm AllianceBernstein has long been a trusted source within global finance and capital markets —  with $680 billion in client assets, they regularly publish in-depth research on all aspects of asset allocation, including whether crypto or NFTs should be a part of it.

On the cutting edge of NFTs

Harper Reed is a technologist at General Galatic Corporation. He was a former CTO for the Obama 2012 campaign tasked with advising policy experts on the connective capabilities of tech. The technology he developed at his former start-up Modest Inc. was acquired by Paypal, and now he sits on the advisory boards of IIT Computer Science and the Royal United Service Institute, as well as the Cornell College Board of Trustees.

Daouda Leonard, CEO of CreateSafe, has over a decade of experience in the entertainment industry. He’s managed and produced artists such as DJ Snake, Skrillex, and BloodPop, but in terms of the cryptomarket, he’s most known for facilitating Grimes’ incredibly popular NFT drop “War Nymph.” His company, CreateSafe, aims to connect artists with an open source support network to create, manage, and grow their own business.

Trevor McFedries is the founder of the technology startup Brud and the creator of virtual pop star Miquela. McFedries’ work at Brud focuses on leveraging technologies to build an entertainment platform aimed at Gen Z. A former musician, he was known professionally as Yung Skeeter and worked as a DJ, producer, and director for Ke$ha, Azealia Banks, and Katy Perry. He was an early employee at Spotify, and is now trying to leverage Brud to better help newcomers navigate cryptocurrency.

More on their bios can be found here.

What is pushing the envelope

While NFTs have had a tremendous impact on entertainment, Weissman asked the panelists to discuss some of the best and most surprising executions of NFT technology. Outside of art monetization, Crain noted that the ethereum technology has done tremendous work in the realm of virtual property rights — he states that domain names that use distributive ledgers are starting to establish the closest thing to “land ownership” in the meta-verse.

Leonard returns to the root of where NFTs were popularized: Cryptokitties. He states that the cross between “gaming and the NFT space” is particularly interesting, as where that community intersects has often been where a lot of the hype originates: Cryptokitties and NBA Top Shot are two of the biggest NFT Marketplaces right now. He noticed particularly how gaming has affected NFT exchange, as buying and selling has become almost centered around a “gamified” community.

McFedries has been actively following NFT X, a community-owned protocol for NFT index funds on Ethereum. While NFT X directs crypto-art to a more specialized finance category, McFedries believes that the ability to make “instant liquidity for this currency” will determine the success of NFTs in the future. He has also been following the success of EulerBeats, a “ConsenSys-backed collection of audio NFTs” which have blown up in the music industry, as 25 NFTs in its second series, Enigma, sold for over 45 ETH, or around $85,000.

Reed brings up Unlocked Protocol, a program protocol that uses blockchain technology to allow users to monetize their online content. While Reed states that the program was originally used for article subscription and online newsletters, Unlocked Protocol has expanded to manage authenticity and identity of crypto-wallets and NFT keys. He also really admires the works digital artist Pak has released, utilizing ethereum to create a unique form of “burn art” — in which an artist uses aspects of ethereum to burn in an NFT, delving into aspects of both NFTi and DeFi world.

Where are NFTs headed?

The panelists discussed two very important factors that could ensure the success of NFTs: community and accessibility.

Reed believes that NFTs do suffer from an accessibility issue, especially when it comes to the actual transparency of the technology. He imagines a potential future in which NFTs are purchased in a portal similar to Coinbase. McFedries states that Coinbase helped make bitcoin more accessible because it allowed users to transact across Web 3.0.

Leonard and McFedries also pointed to instances in which people of color were being actively excluded from the community, but also ways in which these artists were able to utilize aspects of hip-hop, entertainment, and art to stake a claim in the crypto-industry.

“Owning art is important in our providence of the art world,” Leonard said. “Because it really enables you to see the value of the good you’ve purchased, specifically as we move into this analog meets virtual world.”

All panelists agree that the best way to counteract a lot of the “snake oil” salesman marketing in NFTs is to find a community. Actually talking to people who have had experience selling, executing, and creating NFTs will help demystify a lot of the unpredictability of the ethereum-based currency. Leonard, for example, runs a private discord server called Friends with Benefits ($FWB), a “open-source” community that brings together a network of crypto-thinkers. What makes the server unique is that in order to join the community, every member needs to own at least 60 $FWB tokens.

In addition, McFedries believes that the youth hold tremendous power in the NFT space, and that often in a community, it wouldn’t hurt to listen to what the next generation has to say. He cites DeFi Projects as an example — their CEO is 19 years old, one of their core developers is in the eighth grade, and the company has over 100 million dollars locked up in smart contracts.

“Looking to the youth branch is always a good idea. I think the community is trying to make sure they are saying things that regulators want to hear, when instead we should have regulators hear and speak to these really compelling stories so they don’t bury this technology,” McFedries said.