The Art Market is Looking Up...

An Optimistic Outlook for the Art Market 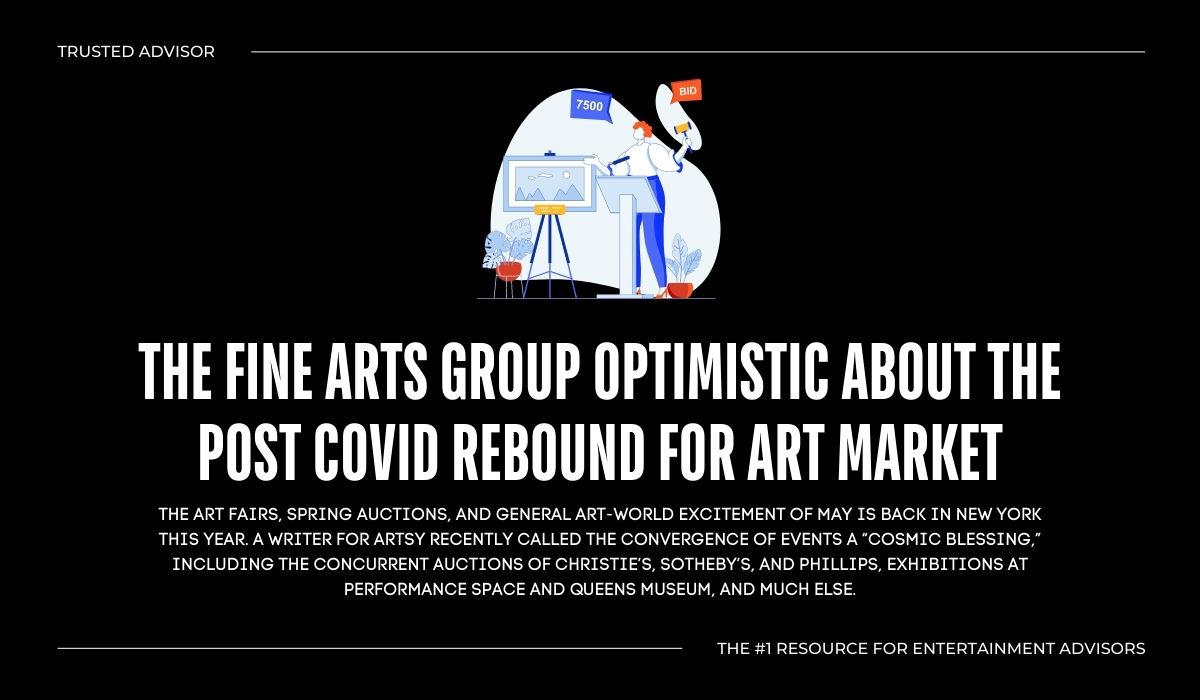 The art fairs, spring auctions, and general art-world excitement of May is back in New York this year. A writer for Artsy recently called the convergence of events a “cosmic blessing,” including the concurrent auctions of Christie’s, Sotheby’s, and Phillips, exhibitions at Performance Space and Queens Museum, and much else.

Amidst the blessing, on May 12, Thursday, The Fine Art Group, a partner of Trusted Advisor, presented a livestream on the Spring 2022 Auction Season and the contemporary art market.

After a period of pandemic-induced decline, the world’s art market returned to form last year. The pre Covid market peak had been in 2018. But the November 2021 auction market saw activity return to that level, with a high sell-through rate of 96.4%, a happy contrast to the 90% figure of fall 2020.

The Macklowe collection at Sotheby’s in November brought in $646 million, with the benefit of works by Mark Rothko, Alberto Giacometti, and Jackson Pollock. This made it the most valuable single-owner auction ever staged.

“Given the global political and economic outlook collectors and investors are looking to more tangible options. This has never been more evident than the last two week… the spring auctions in New York have proven the art market is an economy unto itself, generating nearly 2.5 billion in sales,” remarked Shane David Hall, Director of the High Profile Division at TFG and Trusted Advisor Board Member. “Big numbers are what makes headlines but the real story here is supply and demand, the season was made up of top works which now may be off the market for generations all the while collector’s appetites will only grow.”

In the Thursday livestream, Heriot was especially excited about what she called the “ultra-contemporary” artists, such as Flora Yukhnovich (b. 1990), or Hilary Pecis (b. 1979). After a bit of talk about the ultra-contemporary group, the presentation moved forward to May 2022.

Ratcheva said the spring action in New York has been “tremendous … there’s so much going on.”

One example of the excitement is an Andy Warhol, “Shot Sage Blue Marilyn,” which sold for $195 million, becoming the most expensive artwork ever sold by a U.S. artist at auction.

Shot Sage Blue Marilyn was part of the total sale of the Collection of Thomas and Doris Ammann. That collection was wildly successful: 98% sold by value, 94% by lot, total value of nearly $318 million.

All of the proceeds from the sale will go to charity. The owner, the Thomas and Doris Ammann Foundation Zurich, is a charitable organization that will use the proceeds to fund health and education programs for children worldwide, according to a press release.