Communicating with clients about ESG, NFTs and other difficult three letter acronyms 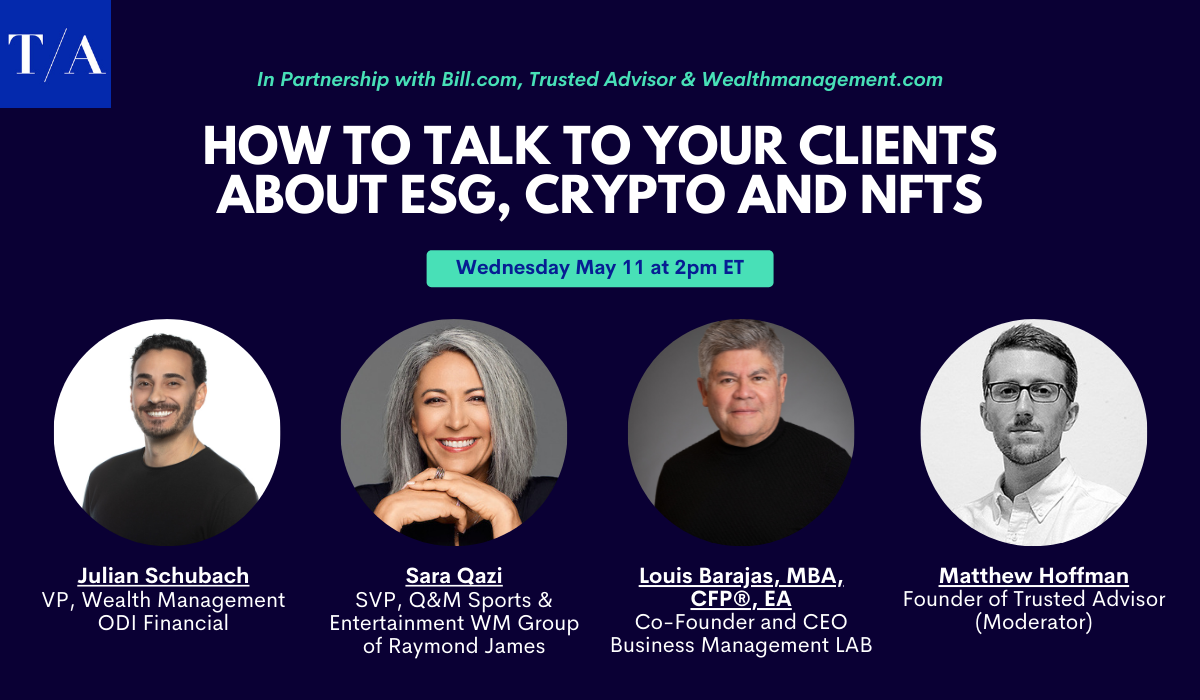 WealthManagement.com’s managing editor, Diana Britton, hosted a webinar May 11 on how to talk to one’s clients about ESG, cryptocurrencies, and non-fungible tokens.

Much of the talk was about the different generations of clients, their different experiences and expectations. For example, Barajas said that for a period of about 11 years, beginning in the trough that followed the global financial crisis, “an expectation grew up that you could not lose money in the market.” People in their 20s, including those whose musical athletic or other gifts have given them money to invest, “have not experienced anything like the levels of volatility we have now.”

This, Barajas added, raises the threat that their investments will be more “behavioral finance” ruled by greed and fear, than rational personal planning.

ESG and the Generations

When the panel turned its attention to discussion of various environmental, social, and governance screens for investors, Qazi, too, spoke in generational terms. The young, she said, are ahead of the curve in understanding these screens. They “get sustainability.”

The consciousness of the C-suites, too, she said, “has changed in a really good way.” Companies have taken to heart the admonition “adapt or die.” Investor interest in ESG is one of the 21st century facts to which they have to adapt.

As a consequence of this generational shift, “about 80% of all the companies in the S&P 500 actually report sustainability as part of the annual and quarterly reports.”

The same generational shift manifests itself in a greater comfort level about cryptocurrencies. The panelists generally agreed that younger people see sophisticated individuals, institutions, even central banks adopting crypto and they say, as Barajas put it, “if they are interested in this, perhaps I should gain exposure to it.” Fascination has joined forces with acceptance.

Schubach made this suggestion to advisers: put your own skin in the game. If you represent investors in Gen Z or Gen Alpha, you should not only know crypto in an intellectual sense, you should own some of it. You should “dabble.” [For the record, in colloquial usage the birth years for Gen Z — the “zoomers,” — range from the mid-to-late 1990s until the early 2010s.]

A Challenging Time for Stablecoins

May 2022 thus far has not been a good month for stablecoins, the portion of the cryptocurrency space that presents itself as the safe ‘bank account’ of the crypto world, a refuge from the roller coaster valuations of much of the rest.

The day before this webinar two crypto concerns, Tether and Bitfinex, had reached an agreement with the New York Attorney General’s office to settle disputes over whether Tether’s coin, tether (USDT) in particular is what it is presented to be.

Tether has represented since launch in 2014 that the value of its token is pegged to, and is 100% backed by, corresponding fiat assets. This isn’t merely a matter of making a promise to would-be redeemers. There is an algorithm, a smart contract, in place that is designed to keep the token … tethered, by determining when the reserve needs to be topped off.

But last October, the Commodity Futures Trading Commission found that, at least since June 1, 2016, it was misrepresenting to the market that it had sufficient U.S. dollar reserves to back each USDT in circulation.

TerraUSD (UST) offers a similar face to the world, although the UST is supposed to be pegged to the U.S. dollar not by reserves but through a complicated system of minting and burning. UST is the invention of the Luna Foundation Guard and the sister currency of the luna token.

In recent days both USDT and UST have “broken the buck.” As Hoffman said at the webinar, “It will take a bit of time to see, one, what happened and, two, why it happened.”

Schubach said that there has been “chatter behind the scenes,” especially with reference to UST, that certain high net worth individuals “made out like bandits” when the buck was broken.

Barajas said that the troubles with stablecoin helps illustrate an old adage, “don’t ever invest in something when you don’t understand what is going on.”

Looking to the Future: Near and Not-so-Near

Looking into the near future, Schubach said “we’re probably six to 12 months away from having good ETF offerings.”

Also speaking of the near horizon, Qazi said, “If you’re looking at buying into the blockchain venture funds, you have to be concerned that ‘winter is coming,’ just as winter has long been ‘coming’ for the public equity markets.”

A webinar registrant, Michael, asked about the independence of government possessed by DeFi, and whether that independence gives crypto assets extra appeal. This question seemed to unleash the inner futurists of the panelists.

Schubach said, “Our personal identifier will go digital and end up on a blockchain.” This will eliminate any need to carry around physical passports or the like.

Qazi went further, half-jokingly, “We’re going to be chipped. We’re all going to be LoJacked in the future.”

Near the end of the webinar, Barajas spoke to concerns about new technologies and fears that they may work to the disadvantage of the artists whose music ends up on blockchains, and in NFTs. He said, “I know a lot of musicians. They don’t have this concern” about using the new tech in their craft.

To them, and to Barajas and Business Management LAB, he indicated, the change to blockchain and NFTs is simply the latest change in format and platform, as the musical world has successfully changed in recent decades from vinyl to 8-tracks, from tapes to CDs, from disks to the digital world. “We have a lot of artists,” he added, “making a lot of money from their recordings, and they don’t have to go out on tour so much.” The doubters have been proven wrong. That was a hopeful concluding note for the event.